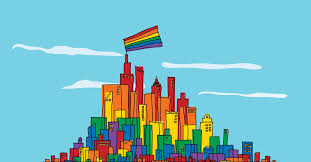 In the postmodern context, heteronormativity, i.e., the assumption that heterosexuality is the "standard" sexual orientation and that all other orientations violate it, normalizes behaviors, values, and cultural aspects of typical heterosexuality and reinforces it. In addition, heteronormativity assumes that there is only one gender paradigm, which is male and female.

Heteronormativity serves to perpetuate an inaccurate male-female gender binary and marginalize those who exist outside the binary, and those who reject traditional or patriarchal gender roles and expectations.

From a heteronormative perspective, the most desirable course of life for any individual is typically one that includes finding a partner of the “opposite” gender in early adulthood, marrying, having children, and assuming traditional gender roles throughout life.

Those who identify as LGBTQ+ face many barriers as a result of heteronormativity, and may be seen as inferior, confused, or abnormal.

In addition to causing homophobia, transphobia, and other forms of prejudice and discrimination, the notion that LGBTQ+ people are somehow flawed or less than heterosexuals can have a direct impact on their mental and emotional well-being as well.

Heteronormalisation implies that the world is either black or white. If only we could broaden our mindset to see the rainbow beyond it.