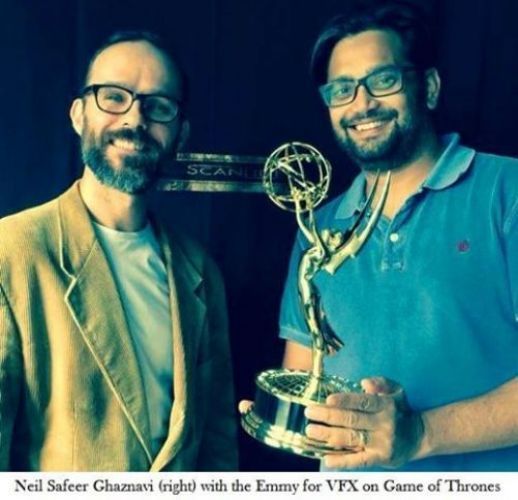 It is perhaps fitting to say that Game of Thrones is the best thing to have come out from HBO.The fantasy drama has attracted record viewership and has acquired a cult status among its fans. Not only that, the series has also been critically acclaimed for its particularly for its acting, complex characters, story, scope, and production values. Another high for the series is its breathtaking VFX graphics. But did you know that those jaw dropping visual effects is the work of an Assamese guy?

Meet Neil Safeer Ghaznavi whose visual effects is taking Hollywood by storm. And if you thought he has worked only for GoT, you are in for a huge surprise. The Assamese artist has worked in many big Hollywood productions such as Captain America, Batman vs Superman, The Twilight series and many more. So how did a youth from Assam landed in Hollywood. Lets trace his journey.

Neil is the son of late Mohammed Ghaznavi and Naureen Ghaznavi, who were originally the inhabitants of KK Road, Jorhat, but now are settled at Lachit Nagar, Guwahati.

Born and brought up at Duliajan where his father was an engineer in Oil India Ltd. After getting his education in Darjeeling and Kolkata, Neil went on to study Graphic Arts in San Francisco. In 2006, he moved to Vancouver to pursue his career in special effects. He got his first break in the 2007 Hollywood movie The Game Plan, starring Dwayne ‘The Rock’ Johnson.

The Assamese visual effects artist plies his trade with Scanline VFX in Vancouver, Canada. And the firm is responsible for the visual effects of the GoT. And as the series got popular, they also started to receive accolades for their work. And not just any other accolade mind you. The team, comprising Neil won the prestigious Emmy Award in 2014 for their outstanding work in the series.

This surely is something to be proud of isn’t it?

A down to earth person, I love simplicity in all aspects of life. Myriad thoughts crisscross my mind all the time. Pondering over them and giving them an identity through words is what you will find here and VBC VIT has provided me a great platform. So folks, follow me on this expedition as I share my thoughts, perspectives and reflections from my life. Always welcome a penny for your thoughts. Stay happy and stay blessed!! Keep smiling 🙂